Worth the wait: Mancheno stays cool for Dogwood title 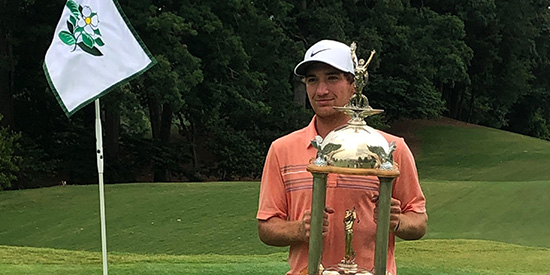 ATLANTA – Before Brandon Mancheno could claim his Dogwood trophy, he had to stand around and think about it for half an hour. Some players may not do very well with that, but to Mancheno, that’s what teammates are for.

Including Mancheno, there were four Auburn players in the Dogwood Invitational field. When the horn blew Friday afternoon to call players in for lightning, Mancheno had just hit his tee shot on the par-3 17th. He was playing in the final group, and he was tied for the lead with Isaiah Jackson, who had just signed for a final-round 63 when the storm hit.
>>Read the rest of the story

Ashton Poole might not have been in the position to win the 52nd Dogwood Invitational if it hadn’t been for an old friend back in Charlottesville, Va.

Poole got a little nudge to get in the field a year ago from former U.S. Amateur and British Amateur champion Vinny Giles, who had been a two-time winner of the Dogwood.

“When a former champion calls, you listen to what they have to say,” said Dogwood Tournament Chairman Edward Toledano. >>Read the rest of the story

Lloyd Jefferson Go Breaks Through at The Dogwood Invitational

After weeks of threatening leaderboards, Seton Hall’s Lloyd Jefferson Go from the Philippines was able to put the pieces together and break through with a win on Saturday in Atlanta. The newest Dogwood Champion fell behind early but made a furious charge that would be just enough to edge ahead of the field, winning by one shot over Georgia Tech golfer Luke Schniederjans.

Go would begin the day in a three-way tie for the lead, shared with former champion Dawson Armstrong, who has had plenty of experience at Druid Hills, winning The Dogwood in 2015 and finishing in a tie for second in last year’s championship; and Campbell’s Gaston Bertinotti from Argentina who was hoping to cap off an impressive 66-68-67 performance with a big win. >>Read the rest of the story